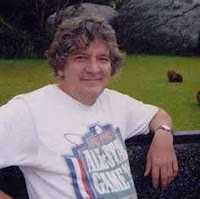 LIFE IN THE SUBURBS


The grass is snake fangs.
Air’s synonymous with storms.
A hand is bitten in two places.
Fifty years
and the tempest is still with us.

The house includes trees,
anger, a sewer system,
and something slithering
across the lawn.

Meanwhile, a flower
strives to be the future
and snakes, in numbers,
breach the wet and weakened
walls.
***

THE MAN WHO IS EVERYTHING TO HIMSELF, NOTHING
TO ANYONE ELSE

He has super-sensory hearing.
Doesn’t miss a thing.
And this despite the fact
that he lives under
a highway overpass
and survives on a diet
of cheap liquor
and trashcan scraps.
And as for his gray eyes,
their vigilance is unsurpassed
whether its keying on
the young lovers
strolling along the riverbank
or the junkie shooting up
by the railway trestle
or some guy passing by
that he knew in
better circumstances.
And he’s sensitive –
he has to be –
to the weather, to the light,
to his incessant cough,
and the protestations
of his liver and kidneys.
He’s human,
more human than most,
because his awareness
is non-stop
and its core lies
in the heart
that used to feel
in different ways
and the mind
that may not know
as much as it used to
but is an expert
on his current
narrow surrounds.
You toss some silver his way.
He grabs it gratefully.
True, he begs
for your change
but he leaves your identity to you.
***

I’m not sure why they’ve come.
And their communication skills are as pale as their features.
Is it something they forgot to tell me in life? Or warn me against now?
Sure there’s been plenty of things that I’ve one
that are worthy of their remonstration.
Is that why the ghosts of my mother and father
creak the floors, flutter the curtains, rattle the windows?
Or is this merely fall-out from dead world explosions?

I struggle to explain these sightings with pictures and poems.
Maybe I should stick to science –
microscopic flakes that form dust, catch the moonlight.
The dead survive by rendering themselves
out of whatever molecules are at hand.

I’m not cowered by their visits.
They’re iconographic more than anything,
They’ve followed me from Brisbane, Australia
to Providence, Rhode Island.
It’s not their fault that their message is indecipherable.
Maybe they figure their very presence should be enough
for this the mistake-rich tundra of an incorrigible human life.

The world may be rotating but its occupants are linear.
Small or immense, it doesn’t matter.
Death is life’s rotten little secret.
So there really is no need to remind me.
But they relinquish their grave anyhow.
Arctic white and fresh as the midnight air,
tiny blots of light like the birth of stars
or fully formed images
taken from the photographs on the mantle,
vibrating, evoking this all-but-unthinkable presence.

The family wheel rolls on
through the listless and the tortured,
the welcoming and the unbeliever.
In their state, it is free of device, of ornament.
A transfiguration without windchimes or colored ribbon.
They’ve no energy, no matter,
and yet somehow they agitate themselves into a kind of being.

So go ahead, wisps of nothing,
practice your ploys, send your messages,
tell your jokes, evoke your tragedies.
I’ll be here, fumbling in the bedsheets,
armed with nothing but thoughts and feelings
and the moving images they record.
***

I’ve been out in the desert
for half a life-time.
It’s barren. It’s dry.
And hostile for plant and animal and man alike.
Sun’s hotter than dragon’s breath
and there’s no such thing as shade.

This place is so weathered,
the strain on flesh and blood is intense.
Rocks crack into pieces
or are eroded by wind.
And the place is so flat,
the air so searing,
the horizon is blurry
and unworthy of the name.

I first came here to prospect.
Now I’m down on my knees,
crawling about,
looking for an underground source
of liquid.
Of course, I come up empty.
That is if I come up at all.

Now I know that love
is out of the question.
But you never did rule out rescue.
And you know where I am
and the conditions I’m living in.
Despite your lack of open arms,
I know you have pitchers full
of cool, clear water.
All I ask you is to sprinkle some
on my cheeks, my brow.
Pretend that it’s sweat
if that helps.
***

In her dark skirts, black sweaters,
she’s less immediately arresting
than some
but she has a habit
of evolving in mixed company.

For she’s slight of form
but not of fluency and balance.
Yes, she can adopt
the disdain, the slouch,
of our artsy set
but she occasionally performs
this winning impersonation
of someone from the upper-crust,
snobbish, affluent and exclusive.

Despite the countermanding
of her black eye shadow,
her eyes are wide.
And the wisdom she’s always reaching for
can’t disguise that baby face.
She’s an original.
We all are.
But maybe she’s the original.
Lucky then, she can keep up with that.
Setu, July 2019

We welcome your comments related to the article and the topic being discussed. We expect the comments to be courteous, and respectful of the author and other commenters. Setu reserves the right to moderate, remove or reject comments that contain foul language, insult, hatred, personal information or indicate bad intention. The views expressed in comments reflect those of the commenter, not the official views of the Setu editorial board. प्रकाशित रचना से सम्बंधित शालीन सम्वाद का स्वागत है।